The Development Committee was formed.

The Congregational Pledging process started, with around £200,000 being raised.

Professional Community Survey undertaken to underpin the need for the Keystone Project.

Grant-funding teams set up by the Development Committee to investigate all possible sources of grant assistance.

Revised Presbytery Plan - the major part of the new Ravenscraig development area has been added to our parish.

Draft building plans agreed by Kirk Session and Congregational Board.

Go- ahead to research funding and proceed with the project from Hamilton Presbytery and the Church of Scotland General Trustees.

The congregation were asked to increase their pledges wherever possible to bridge a potential funding gap. Over £80,000 was raised in around six weeks!

A group of the Church of Scotland General Trustees met with the Development Committee and our funding package was accepted by the Trustees, who effectively have agreed to underwrite the funding of the project. The congregation will be given a grant of £20,000 and both short- and long-term loans will be made available to cover cash-flow needs until all the congregational pledges are paid and fund-raising is complete. Tenders were issued to four potential contactors.

The tenders have been returned! All three tenders received are above budget; our architect and Quantity Surveyors will now work on reducing costings while minimising any major effects on the buildings - the size of the new buildings will not be affected, for example.

The Development Committee is currently finalising with our architect and Quantity Surveyors the details of the amendments to the tenders received from three potential contractors to get them under budget. We also await final approval to proceed with the building work from the Church of Scotland central offices. It is hoped that building work will start in February or March, with an 11-month project time, so completion is expected around Easter 2016. 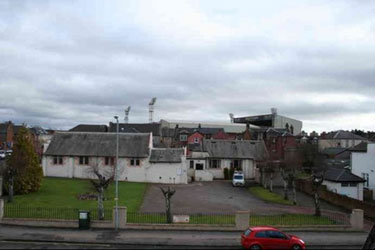 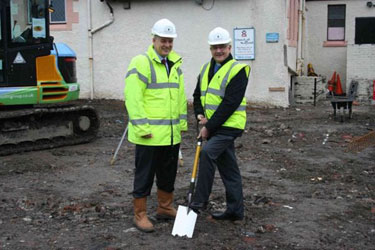 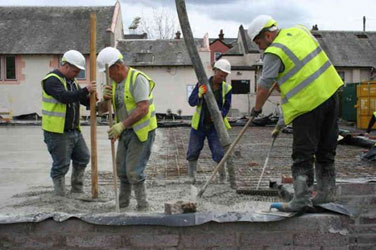 By the beginning of April work was well underway on the foundations and it became possible to visualise the size of the footprint of our new extension. - 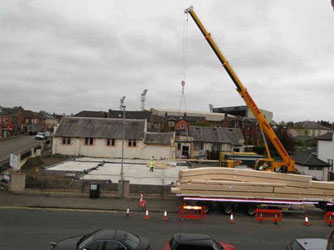 Early in May the concrete was poured for most of the floor slab and there was great excitement towards the end of the month when the Glulam timber frame arrived from France to be unloaded by the mobile crane. 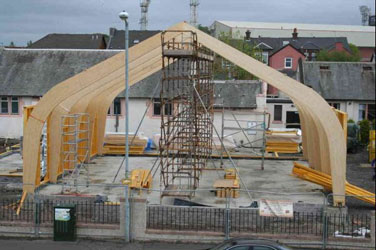 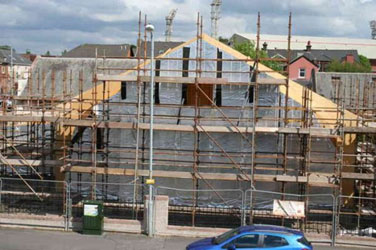 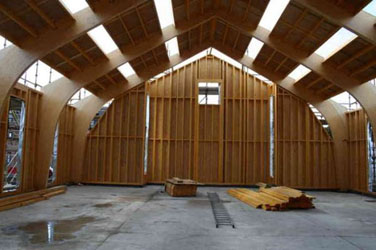 Early in the month we saw the first parts of the kit being erected once scaffolding had been installed and it took only a few days for the full frame to be in position. Attention then turned to other matters, mainly brickwork, before the roof sections were installed. 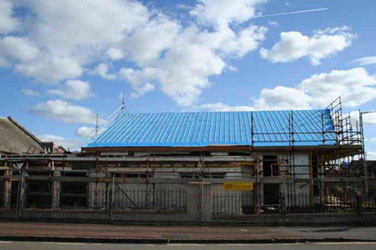 We are rapidly heading towards a building which is wind- and water-tight. All of the roofing structure and insulation is in place, the steel roof over the coffee bar area is complete and the felt and slates will be laid on the sanctuary roof in the next couple of weeks. Once all this has been done, the internal fit-out can start. 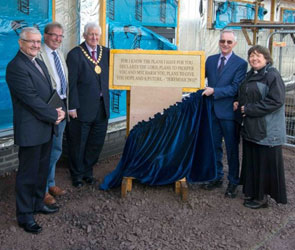 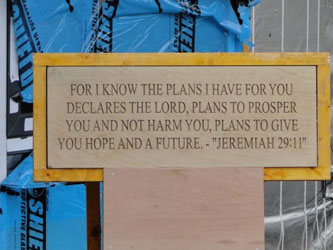 On 27 August the Foundation Stone for the building was unveiled in an afternoon ceremony. The welcome and introduction was provide by Rev Arthur Barrie, the Foundation Stone was unveiled by John Maddock, a short act of worship was conducted by our locum, Rev John Stevenson, followed by a prayer from Rev Fiona Nicolson, Moderator of Hamilton Presbytery and a short speech by Provost James Robertson of North Lanarkshire Council. Children from three nearby schools, Knowetop Primary, Firpark Secondary and Bothwellpark Secondary released balloons to celebrate the event. Afternoon tea was served in the current church buildings. 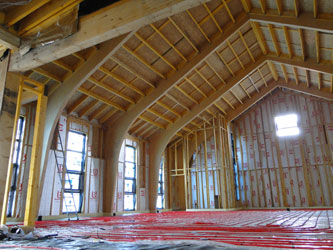 Work continues on the buildings, now mainly indoors, so there is not so much progress to see from the outside. The interior is being fitted out, insulation installed and the walls being plaster-boarded. The heating installation is well underway and hopefully heating will be restored to our existing building in early October. Details of the decor and furnishings are being finalised, with the congregation invited to contribute to the Chair Fund to provide seating for the new sanctuary. Work will soon start on removing the scaffolding and let us see for the first time the full outline of the new buildings. The project is still running to time - not a single day has been lost to the weather! 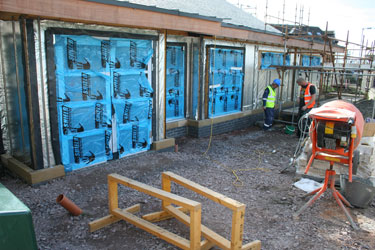 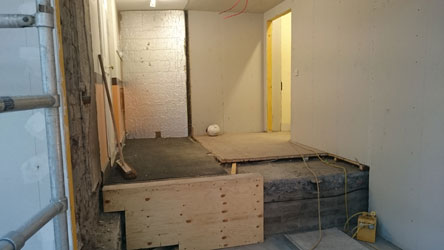 During these two months work continued apace both inside and outside the new buildings to prepare them for handover by Christmas. The break-through between the old and new buildings had been achieved by the start of October and work began to construct the new linking foyer and fit the stair case and disabled lift. By mid-November most of the scaffolding had been removed and work on the car park was well advanced. The new catering kitchen was fitted out at the end of November. 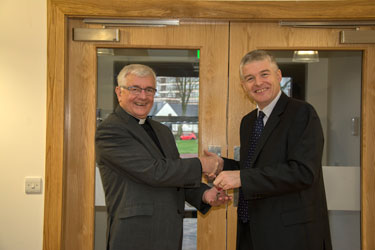 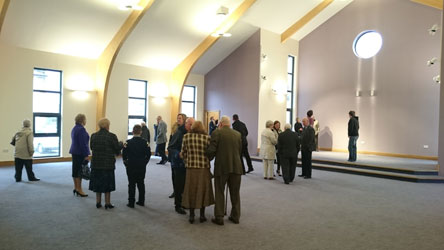 Hand-over of our new buildings! The buildings were handed over on Friday 18 December at a small reception in our new Coffee Bar. The keys were officially presented to our Interim Moderator and Locum Minister Rev John Stevenson by Ronnie Burrows, Director of Fleming Buildings, with members of the Development Committee and those involved with the kitchen design looking on. The site manager Richard Gartley was presented with a Christmas hamper to thank him for all his hard work on our behalf. The congregation got their first really good look inside the new buildings after the church service on Sunday 20 December and everyone was really pleased with what they saw.

The 230 new chairs for our sanctuary, paid for by the congregation through our Chair Fund, were delivered from Poland on 16 January and a large team turned out to help unload the lorry.